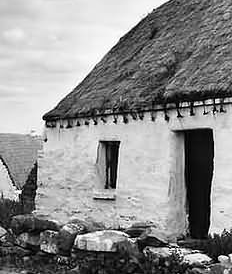 This is a report written by the female client after a detailed past life regression session. This is reproduced with the kind written permission of DS, exactly as she wrote it, so others may see what a typical session entails.

Martin had asked if I was drawn to any particular area of country, and as I’ve always felt an affiliation with Ireland, Irish music etc we decided to ask my unconscious if I had ever lived there…

The first thing I was aware of was a tight restrictive pressure around my chest, really affecting my breathing. I couldn’t see anything and wasn’t even sure if I was sitting or lying. Gradually I realised that the restriction was external as opposed to internal (i.e. not my asthma) and I was wearing a corset that was tightly laced.

Slowly the room became lighter and I could look down at my clothes (bloomers and black stockings, obviously my undergarments) and I was sitting on a bed in a small, whitewashed room. The only other items in the room were an old wooden truck, a knotted rag rug in front of a fireplace and a small cabinet next to the bed . Hanging in the fireplace was an black pot which I think was used for heating water, not cooking.

My name was Mary, but I felt that this may have been a diminutive, and the following morning, when I wasn’t even reflecting on the session, the name Mary O’Connelly came into my mind very strongly.
Martin questioned me about my family and I had an older sister, Margaret who worked away as a servant in a large house. She was courting a butchers boy who she had met when he dropped deliveries at the back door of where she worked. I don’t think I saw her often anymore, but we wrote to each other.

Martin asked if I knew Margaret in this life at all, and I recognised her as my friend Lesley. I was also in service but was home at the moment as I was unwell with a chest complaint, which was exacerbated by the fact my mother insisted I wore a corset.
I was resentful of this, but wouldn’t dare defy her, so could only remove it when I went to bed. In order for me to maintain the position of nursery maid that I held at Glenmoor House, I had to dress ‘above my station’, and my mother insisted that I kept this position even though it affected my health.

All the time I was answering Martin’s questions I was having trouble breathing – not the same feeling as my normal asthma, but an awful feeling of restriction. My discomfort was so obvious that Martin asked me to move forward to the next time I took the corset off, and then I felt myself laying in bed, my chest a lot easier, but so cold that I was actually shivering and my teeth were chattering. Part of me was aware that I was actually in Martin’s office which was perfectly warm, but I could not shake off this awful bone chilling cold of laying on a thin mattress with only a rough grey blanket.

My father was absent, I didn’t feel that he was dead, just away, and knew instinctively that this was something that we didn’t discuss. Since he left my mother had to take in mending and Margaret and I had both been sent away to work. My mother was rather austere, not harsh but not very affectionate or approachable.
Martin asked if she had any relevance to my current life, and looking into her eyes I felt that I recognised her as my maternal grandmother. At no time did I actually see my mother during the session, but when I was asked to picture her and my father I had no difficulty at all. The image I had of my father was of a photograph though, not the man in person. Maybe the fact I felt that he had little relevance to my life was because I hadn’t really known him, perhaps I had only ever seen a photograph.

We lived in a rural area of Southern Ireland, toward the South East, but not on the coast. Martin then asked me to move forward to another episode in my life and I was sitting in a large, light, room, watching over two children as they worked on their school books. Glenmoor House, where I was in service, was 14 miles away from my home.
The year was 1833 and I was 18 years old and looked after two children: Elizabeth aged 8 and Grenville who was 5, nearly 6. Their family name was Stewart, and I feel it was spelled this way, not Stuart as I would normally spell it.

Martin asked if I had a love interest but I didn’t, my job didn’t bring me into contact with any possible suitors, whereas my sister Margaret worked ‘below stairs’ in another house and so had a wider circle of acquaintances than I. She was great fun to be with and flirtatious and very outgoing, whereas I was serious and reserved, unlikely to attract anyone.
As a nursery maid/nanny I was in a slightly elevated position compared to some other servants, hence the need for a corset to make me appear more refined.

I enjoyed my job, the children were nice and I had Saturday morning off each week. Because my home was so far away I was allowed to take a whole day every 2 weeks which gave me time to get home in a pony and trap to visit mother – taking my wages in a handkerchief. (I could see 6 coins, looking like old pennies, but I’m not sure if that’s what they were.) I was sitting by the fire, but was still cold and I knew that I was suffering from consumption (T.B.). My chest felt easier and I think that the mistress had allowed me not to wear the corset when she realised it was causing me problems.

Martin then asked me to move forward again, and I was 28 years old, in church, about to get married to Henry, who drove the pony and trap. The wedding scene faded and then I was sitting in a pew, resting, while Henry signed a document that was required.
I was feeling guilty because I knew that my health wasn’t good, and that I wasn’t a good choice for a wife. I had told Henry though, I’d made it clear that I wasn’t well, but he wanted to get married anyway.

Martin asked if I recognised Henry as anyone of relevance to my current life, and I recognised him as <name removed>, someone I had known for a few days when I was in my early teens.

We then moved forward again and I was sitting in our cottage, aged 32, doing mending that was held in an embroidery hoop (perhaps my secret vice of cross stitch has travelled with me through the ages!).
Henry was at work, and our baby, Evan, who was 6 months old was asleep in a wooden crib. The room I was in was tiny, we had a small one up, one down, terrace cottage. As always I was tired and my breathing wasn’t easy.

Martin then asked me to move forward again until I was close to death and I was outside, at night time, huddled in the back of a cart, being taken to a doctor. I was crying as I knew I was dying and I felt terrible at leaving my baby. At the same time I was terribly tired and just wanted to close my eyes and sleep. I feel that I was not much older than 32.

This session was easier than last week – I felt less me, and more Mary, although I was still aware that I was under hypnosis.
When I was so cold at the beginning of the session and my teeth were chattering, a small part of me was amazed because I knew that I was actually in a warm office. It felt more believable than the first session, perhaps because I could relate more to Mary than I could Hugo, and I found it easier to talk, Mary seemed more willing to answer Martin’s questions whereas Hugo was practically monosyllabic.

However, I had no particular sense of recognition, of knowledge that this was a past life. When I first entered the life, everything was black, then all I could see was the wooden truck, and then gradually everything else in the room became apparent. Then, as I moved forward through the life, each scene was quite clear and I could confidently answer questions about my age etc.

Again, I couldn’t tell you that this was definitely a past life or whether my mind made up details to fit the scene. If it was my imagination, I was certainly experiencing genuine cold, because I cannot physically make myself shiver or my teeth chatter from sheer will power. Ultimately I’m slightly more convinced than last week, but still have reservations about how genuine my experience was. It’s weird because as you know I believe in the concept, perhaps it’s just the fact that it’s harder to apply that belief to myself.