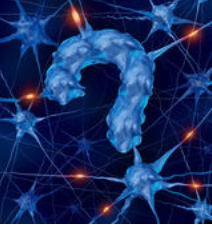 Parkinson’s disease (PD) is a progressive neurological condition named after Dr James Parkinson who first described the condition in 1817.

The disease is caused by the a loss of nerve cells in a small cluster of cells deep in the centre of the brain, responsible for controlling voluntary movements. These nerve cells usually produce a neurotransmitter chemical called dopamine which helps transmit messages from the brain to the rest of the body.
As these cells die, there is a loss of dopamine, so the messages controlling movement stop being transmitted efficiently.

That is why PD sufferers shake as they do.

But what is causing the dopamine-producing cells to die?  The cause of PD is not known, although a genetic link is proposed, and the treatment usually involves topping up the reduced dopamine via medication.

So why is this of interest here?
Could the unconscious mind be accidentally or deliberately causing the dopamine-producing cells to die, and does the mind have the ability to reverse the effects?

I remember working with an elderly lady with severe PD.  When she came to me she was shaking as normal.  But as soon as she entered her hypnotic trance, the shaking completely stopped – without me suggesting that it did so.

I also visited a skilled watch repairer with PD.  When I asked him how he worked on the delicate mechanisms with his shaking, he told me that as soon as he put on his magnifying glasses and focused on the work, the shaking stopped.

And I remember a TV report of a keen cyclist with PD who was about to do a sponsored bike ride.  He could barely walk up his own stairs, but as soon as he mounted his bike the PD seemed to disappear.

In all of the above cases the PD symptoms returned when their focus was lost.

Is it possible that the unconscious mind, that controls almost all of our autonomic body functions, has the ability to turn off the effects of PD, and if so, can that be cemented in place?

Or could, perhaps, the PD sufferer be given an ‘anchor’ to use (like pinching the earlobe) to stop the effects of PD for a short period?

And it has also been suggested that PD could in some way be linked to fear.  When we are frightened, we shake, as our mind is diverted to a flight or fight response.  So is it possible that PD has a root in fear – something that hypnosis could track down and deal with?

Only more research with PD clients will expand this discussion.

And this is rather interesting too……