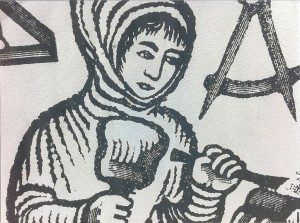 This is a report written by the female client after a detailed past life, and brief between lives regression session. This is reproduced with the kind written permission of DS, exactly as she wrote it, so others may see what a typical session entails.

We talked for about an hour about various life experiences etc, then we started the hypnosis bit where I get comfortable, relax, concentrate on my breathing. Martin is talking all the time, emphasising that I’m perfectly safe, comfortable, and I visualise a protective shell around me that means even if I witness/relive something not very pleasant, I will be detached from it, not emotionally affected to negative degree.

As he allows your unconscious to choose where it takes you itself, then the chances are you won’t select anything dreadfully unpleasant. Martin explained that the hypnosis is to get my conscious to take a back seat, so that my unconscious which apparently remembers every single thing you’ve ever seen or done can take me back through my memories and answer things. Obviously the point of his study is that your unconscious also remembers all your past lives and experiences, and also where your soul goes when it is waiting to be reborn.

I better say now that I’m not expecting you to believe any of this, I’m just telling you exactly what happened.

After the relaxation and visualisation of a peaceful meadow, and positive golden energy flowing through me and relaxing me (feels like it takes about 30 minutes, but hard to be sure), he asked me to visualise a beautiful staircase and then talked me down a flight of stairs, each stair taking me back a year of my life.

At Age 12 he told me to step off the staircase and I would be looking at the front of the house I lived in at that age. I could see the house in great detail and when he asked me questions about the colour of the front door, type of flowers shrubs etc I could see it all, so it was easy to answer.
He then asked me to go into the house and look around, and again, I could see everything clearly – the blue/green flecks of the lounge carpet, beigey yellow 3 piece suite etc.
I then went up to my bedroom and could answer questions about the duvet cover (brown flowers), and then picked my favourite item of clothing out of the wardrobe (red corduroy trousers!). I could also see the other items hanging next to it, yet before the session there is no way I could have remembered the clothes I was wearing at 12.

He then took me back to age 7 and I was at the back of the house, in the garden and again the detail was amazing – a patch of spilt paint that would never wash off the patio, the lichen growing on the small wall that dad had made by pouring concrete into a mould (I’m sure it was the height of fashion in the ’70’s!!!) I heard a noise, looked down, and my cat, was meowing at me, so I knelt down and stroked her, which made me cry! It was so strange – she died when I was 16, yet here I was stroking her again. It was so odd, I could feel the fur, the bony shoulders, everything.. You know when someone dies and the people left behind wish they could see them one more time? Well with hypnosis it’s obviously possible, but not very healthy I should think. The odd thing is that as a seven year old, seeing my cat would have been perfectly normal, not upsetting, only seeing her again as an adult would have been moving. I was obviously also seeing it through my grown up eyes as well as my 7 year old self.

In total, although I obviously have many memories of the house, I haven’t been in it since I was 16 and I know that consciously there is no way I could recall as much detail over 24 years as I did under hypnosis.

Now the weird bit – he took me down a long dark tunnel which got gradually lighter. As I neared the end, all the time he emphasised that I was going back in time, to a past life that I would be happy to revisit and tell him about.
He counted down from 10 and said that at one I would be back in a past life. I was aware of the brightness of daylight after the dark tunnel and immediately aware that I was a man. I certainly didn’t have an immediate knowledge of this mans life, but when Martin asked me specific questions I could answer them without having to think of the answers (At first my answers were monosyllabic as speech seems a real effort, but gradually got easier).

Through his questions we ascertained that I was called Hugo, mid thirties, wearing leather sandals, brown short/dress with a belt and apron and a necklace. I was a stone mason, specialising in shaping large blocks so that they fitted together well. I was working on some type of fortification, in preparation for a siege, lived in quite a large town and was unmarried, and my parents (Hugo senior) were still alive.
Although I didn’t have many life details immediately obvious to me, I had a strong feeling of my character: quiet; hardworking; a loner; happy with my own company, self contained would have summed me up.

Martin then asked me to stay in the same life, and move forward through time to an important event in Hugo’s life. I was then inside a building with rough clay walls, and a wood and thatch roof, looking down a table with a pewter (?) ink well on. On questioning I told Martin it was a court, and I was waiting to be questioned on who my allegiance was to, because the power in the land had switched from one party to another. Obviously I didn’t explain this with any lucidity, but I can now recall my feelings and can understand better what was happening.

Hugo was rather confused, all he cared about was that he was doing his job, but because the opposing party had now taken control, the fact that he had been working on a fortification could be seen as some sort of treachery. All he wanted to do was explain that he was just doing his job, NOT deliberately plotting against the incoming power. However he didn’t have the verbal skills or confidence to make his point very well.

Martin then asked me to move forward to another period in Hugo’s life and I was then much older and laying in bed, no longer working. My apprentice Stuart, who I had trained years ago, was now like an adopted son and he was nearby. The room was very basic, I was laying on my back, looking up at the timbers supporting a roof-probably thatch but it was very dark brown. I was very aware of the dust motes moving in the sunlight that came through the window (no glass).

Martin asked what the outcome of the court had been, and I knew it had been positive. Martin then asked me to move forward until my soul was ready to leave my body. I was looking down at myself (Hugo me), and then floated out of the window where I was drawn upwards. I was aware of darkness below and bright light above.
Martin mentioned gates and I saw the stereotypical gates and then I was in a long white corridor with doors opening off one side. I was aware of my guide, (who I have met in mediation before) being behind me, to my right, and also of another figure standing further back, who I think was supervising us.

For the first time I learnt my guide’s name, Martin asked what it was and I realised he was called Michael. I felt really nervous and uncertain as to where I was supposed to go, or what I was supposed to do – so I just stood! I waited to be given instructions, but none came and Michael just kept smiling at me, amused (in a nice way) that yet again I was being indecisive.

No one came to my rescue so I moved down the corridor and suddenly realised I had to be assessed. As I was waiting, Martin asked me to imagine I was looking in a mirror, and to describe if I had any colours around me, which I did -yellow. (Don’t know what it means, I’ve got various books on aura’s so I’ll have to see). I then went in to a circular/octagonal room, with a high pointed ceiling, a bit like looking up inside a short, dumpy steeple. Everything was still white, and brightly lit, but by no obvious source. There were 5 people sitting behind a very futuristic table: and old man in the middle, two men to his right and then a lady and man to his left. I could only see the faces of the old man and the woman (middle aged blondy/grey hair, kind face). They were all wearing white robes (I realise how stereotypical this sounds, but I can assure you nobody had wings, and as you know, I have no religious beliefs, well not an organised religion anyway).

The old man in the middle had an unusual necklace on, thick silver bands, with a rectangular opal set in a silver in the middle. I was sitting facing them, and I knew I was there to have my life as Hugo assessed. No one spoke, they didn’t need to, but I knew they were watching a replay of my life in their minds. I then had to explain what I had achieved, and what I thought I had learnt, but I just thought it, with no need to speak.
Basically, it hadn’t been a bad life but I had been too introverted, hadn’t actually attempted anything, so therefore hadn’t achieved much (I’m sure I’ve seen the last bit on an old school report before!)
As before I can remember everything in great detail and although was very relaxed, still felt that I could have opened my eyes and stopped the session at anytime if I wanted to.
Martin always emphasises this, that he doesn’t actually hypnotise me, just gives me the tools and instructions to hypnotise myself.